Skip to content
View basket “Vagrant, The – Dark Harmonix / Manta Ray” has been added to your basket.
Sold out!

Arís presents chapter 2 in their Irish reissue series with a rare 1998 Deep House gem from legendary Cork duo Fish Go Deep. The duo’s Vol. 1 EP gets a full remaster, along with a new remix from fellow Cork legend Colm K.

Ireland’s ‘House’ capital of Cork, located on the southern tip of the island, was the epicentre of something special throughout the 1990s. 2 lads were largely responsible for this, and their names were Greg Dowling and Shane Johnson. Founders of the legendary Sweat party that ran in Sir Henry’s nightclub from 1988, the duo went on to hold one of dance music’s longest running DJ residencies there, playing each and every Saturday up until 2001. Their uncompromising vision of deep and soulful dance music, presented weekly without fail, garnered them a devoted and dedicated following.

This impressive run made it inevitable that Greg and Shane would eventually try their hands at production. Following a release for Tim Hanigan and Mark Kavanagh’s Red Records in 1994 under the alias fishgotech, the lads returned to music making a few years later using the updated moniker of Fish Go Deep.

The resulting EP, titled Vol. 1, was independently released in 1998 on the duo’s Eventual Records (the first, and last, on the label) in a run of 500 copies. By doing the pressing and distribution themselves, Greg and Shane were afforded the freedom to make whatever they liked. Under the heavy influence of their Sweat residency, along with the lad’s unbridled love of US and UK house music, they created a unique dance record characterised by a tidy mix of soulfulness and garage-y swing. The latter meant it was popularised by DJs of the UK Garage persuasion over in England, which helped sell out the release swiftly. An impressive feat considering the ruggedly DIY approach they both took, and helped pave the way for a subsequently impressive production career throughout the 2000s.

In recent years, the record has been hard to find and subsequently fetches high sums on the second hand market. So, with kind permission from Greg and Shane, we’ve remastered the original 3 tracks and asked fellow southern legend Colm K to remix. His shuffley nu jazz-y remix, the perfect modern twist on what is a classic record. Vol. 1 is a landmark, one of Ireland’s first deep house records, and an important artefact of Cork’s dance music scene.

There are no reviews yet. 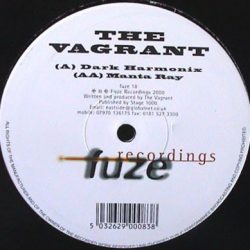